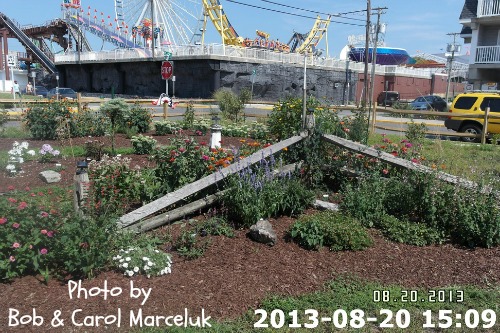 I met Bob and Carol in 2012 when I taught a series of Gardening for Wildlife Workshops for the Ocean City Environmental Commission . . . and, as they say, the rest is history!

They transformed a large expanse of boring lawn  into gardens full of native nectar plants (that bloom spring through fall), lots and lots of caterpillar plants (including MILKWEED of course), native berry-producing trees and shrubs (for cover and food), water features (including a new pond), neat seating areas.  It has given them SO MUCH pleasure and provided an oasis to migrant and resident wildlife.

I wish I was brave enough to add Bob & Carol Marceluk’s habitat to the “Tours of Private Wildlife Gardens” that I lead, but taking people into Ocean City in the summer on a weekend  . . .   In the future I might plan a special tour to barrier island gardens on a date after the crazy summer tourist season.  I’ll keep you posted!

In the meantime, consider writing a comment or words of support for Bob & Carol’s project at the end of the “on line” Press of Atlantic City article.