I am very concerned about Monarchs

This year, I’ve been asked more times than I can count, “Where are the Monarchs?”

It is now fall and Monarchs are migrating through Cape May on their way south to the mountains of Mexico where they will winter. They’re not absent.  We’re seeing some.  But few came from our wildlife gardens, where previously our gardens were responsible for generation after generation.  My garden in all of 2013 (so far) has attracted less than 20 Monarchs and I’ve only found 1 caterpillar.  That’s OFF, big time!

I fear that this coming winter (2013-2014) their numbers at the winter roost sites in Mexico will be even lower than last winter, which was the lowest in 20 years.

Read my latest post on Native Plants and Wildlife Gardens, “Where are the Monarchs in 2013?” to learn about the plight of eastern Monarchs and why we’re seeing so few.

If you are not familiar with the many posts I wrote for Native Plants and Wildlife Gardens (as well as the other excellent daily posts), you might want to bookmark the site and learn from it daily.

At the garden of a friend in Haddon Heights, New Jersey, the numbers of chrysalises hanging from EVERYWHERE on her house and garage is amazing;  she estimated 95 to 100 on September 20, 2013.  They are hanging from eaves, window sills, around door frames, and even on the bricks of her house.  The friend shared that she never saw more than perhaps two pairs of monarchs at one time.  Although she had a fairly good size garden of milkweed, it is pretty well stripped.   Thank you Jean for giving us this GREAT news and sharing your photos.  Let’s hope there are many more pockets of Monarchs like this! 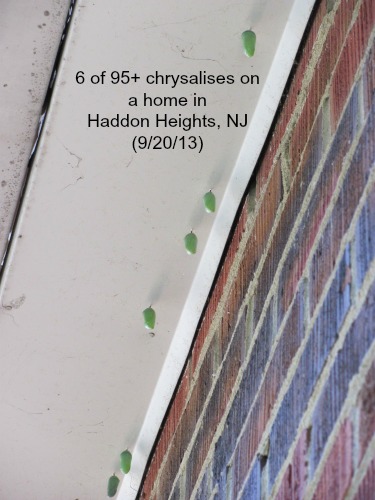 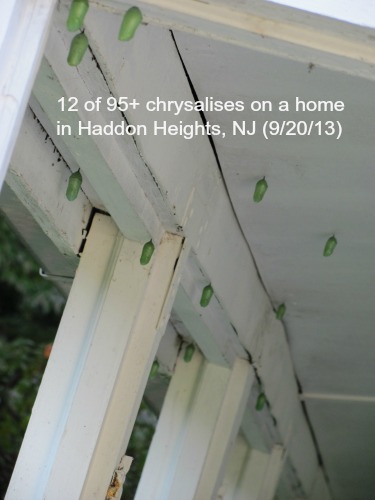