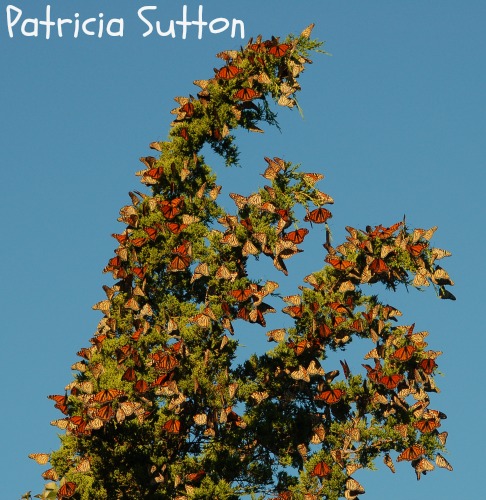 This fall’s Monarch Migration at Cape May has been magical. Each cold front has brought another wave.

And through it all we’re still finding Monarch caterpillars on milkweed, so please, please, please, DO NOT cut down the milkweed in your garden. Despite looking “done” it’s still helping the Monarch population swell.

Yesterday morning (September 25), at first light, I visited sites where Monarchs had roosted through the night. As the sun warmed them and they were able to fly, they dropped down onto blooming Groundsel-tree and nectared heartily. It was magical – no other way to describe it!

Even though I’ve witnessed Monarch evening roosts dozens of times over the many falls we’ve lived in Cape May County, I can never get enough of them. Red Cedar trees sometimes adorned with a thousand plus Monarchs, wings closed and looking like dead leaves until a newcomer flies by and they all open their wings as if to say, “Join us, this is a safe place to rest.”

Another cold front is predicted for Thursday (September 27), winds that just might bring another wave of southbound Monarchs.

If you’ve never witnessed the magic of the Monarch Migration at Cape May, this is the fall to do it. Not every autumn is accented with magical Monarch flights, but this fall is proving to be just such a fall.

I may be out of town and you might miss one.

Instead, pay close attention to the weather

On these posts, folks often predict when they feel the next good Monarch flight might happen. Monarchs often gather at roosts in the dunes and around Cape May Point from about 3 p.m. on at the end of a good flight. If there’s been a cold front any time from mid-September through October, Monarchs may pour to the tip, Cape May Point.

Good luck with the miracle of migrating Monarchs!

See you in the field.