As many of you know, besides writing, Clay has continued to work as an environmental consultant and field biologist for many years.  This year, he reached a major milestone with the publication of “Status and Trends of Raptors and Waterbirds on the Maurice River, Cumberland County, NJ.  25-Year Study Results: 1987-2012.”  This paper was presented and featured at the Partnership for the Delaware Estuary’s “Science and Environmental Summit 2013” held in Cape May in January 2013.

Sponsored by the praiseworthy group Citizens United to Protect the Maurice River and its Tributaries, Inc. as part of its efforts to discover, monitor, and protect the many natural resources of the Maurice River, this study and report is one of very few true long-term studies that examines the changing status of biological resources in the Delaware Estuary.  The study has monitored winter raptor and waterfowl numbers for 25 years on this wild and scenic Delaware Bay tributary, and has examined all waterbird usage – particularly spring shorebirds and fall raptors – for the past ten years as well.

The official abstract is found below, but you can view two versions of this landmark report on the Citizens United – Maurice River website.  The short version is a 14 page glossy illustrated summary, and for those who wish to review the changing statuses and trends in depth, the full 98 page report is also found on the Citizens United website.

This unique study is ongoing, and is now in its 28th year and counting (pardon the pun!).

Pledge Your Support for this Raptor-Waterbird Study

Support Citizens United’s important work and the Raptor-Waterbird study in particular by supporting their team (of which Clay is a member), The Fish Hawks in the World Series of Birding on May 9, 2015.  Pledge on the team’s efforts by filling out Citizens United’s Donation form:

You’ll be supporting this dynamic conservation group in their award-winning efforts to protect the incomparable Delaware Bayshore!

and WATERBIRDS ON THE MAURICE RIVER

Citizens United to Protect the Maurice River and its Tributaries, Inc. 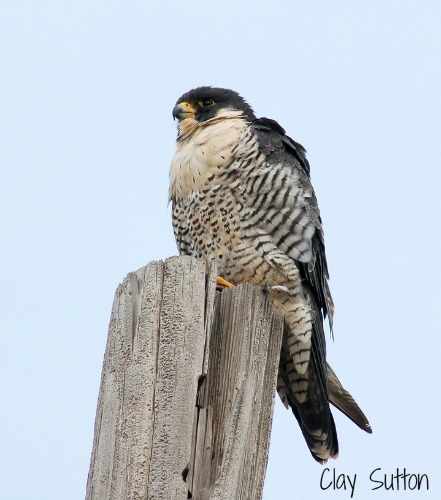 Under the auspices of Citizens United to Protect the MauriceRiver and its Tributaries, Inc., and with funding from the National Park Service, US Department of the Interior, and with goals of discovery, documentation, and conservation, raptors and waterfowl have been studied on Cumberland County, NJ’s tidal MauriceRiver for 25 years.  Over 476 days of field work have been carried out in this long term study.  Initially implemented to document avian ecovalues in response to industrial barging and dredging proposals, core winter raptor and waterfowl point counts have been maintained every season since 1987-1988.  Significant increases are shown for Bald Eagle, Peregrine Falcon, Cooper’s Hawk, Black Vulture, Green-winged Teal and Canada Goose; substantial declines are seen for American Kestrel, Rough-legged Hawk, Am. Black Duck, Mallard, and Northern Pintail over the study period. Supplemental/adjunct fall raptor migration counts have been conducted at East Point, NJ to monitor the hawk migration moving west around Delaware Bay; in 60 days of observation in 1990 over 9,000 migrant raptors were counted (35% of the number recorded at Cape May).  In 2003, studies were expanded into year-round census efforts for all water birds, including focused surveys of spring migratory shorebird use of the MauriceRiver; a daily high count of over 45,000 shorebirds using the lower Maurice was attained in 2009.  Studies have yielded significant data on status and trends, spatial and temporal distribution, and habitat change (with implications regarding sea level rise and climate change).  Findings have been used in the RTE listing process, oil spill protection, prioritization of conservation purchases, testimony in land use proceedings, in management decisions, as well as for educational and awareness projects.  These long-term and continuing studies have substantiated the tidal Maurice River as an important bird use area for the Delaware Estuary, New Jersey, and the entire Mid-Atlantic region by any and all standards and at all seasons.