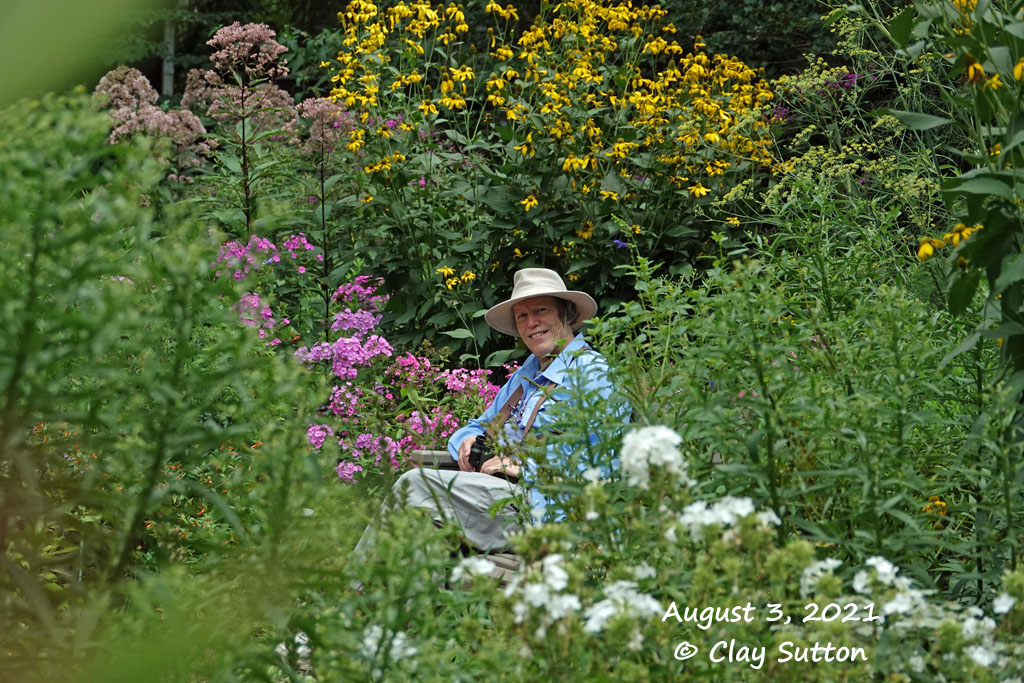 The Unfolding of a Wildlife Garden, One Year in the Sutton Garden

I will be presenting (in person) the “Unfolding Wildlife Garden” Episode for the first time on February 20, 2023 for the Southeast Chapter of the Native Plant Society of New Jersey at Stockton University, Room 246, Unified Science Building, 7:00-9:00 p.m.

I presented the 1st draft 1 1/2 hour program (virtually) on February 17, 2022 for CU Maurice River.  Unbeknownst to Ben Werner and I, the Zoom platform had issues with video and apparently viewers watched a jumpy picture during portions of the presentation.  We have still not learned of a solution on the Zoom platform.

About the presentation:   Ben Werner and I worked on this project all of 2021 (getting video footage and stills) and since then have put in 100s and 100s of hours pulling together some of the stories that unfolded in the garden.  So far we have completed two episodes.  There are many more stories (Episodes) to be told.

The 55-minute “UNFOLDING WILDLIFE GARDEN” episode includes all four seasons in Pat Sutton’s 44-year-old wildlife garden (as of 2021).  This episode showcases Chocolate Cake native nectar plants month-by-month, nearly all of which are also host plants.  Spring nectar offerings begin in Pat’s woods, a third of their property that they recovered from invasives in 2009.  Summer nectar offerings occur throughout the property, but largely in their sunny perennial garden, which sits entirely on their septic field.

Pat’s study of native pollinators (bees, ornately-patterned flies, wasps, beetles, butterflies, moths, and hummingbirds) is woven throughout this episode.  Pat has studied life cycles and life histories of butterflies and moths for the past 40+ years (and more recently those of bees, flies, wasps, and beetles).  Life cycles occur on a daily basis in this wildlife garden.  The knowledge Pat has gained from life cycles she’s witnessed has greatly influenced how she maintains her wildlife garden.  The fragility of insects in all stages of their life cycle is at the heart of Pat’s “hands off” approach.  She sees her garden as a safe supermarket and nursery for pollinators.  In fussed over gardens (think dead heading, cutting spent stems and seed heads, etc.) the very pollinators drawn in are likely to find themselves in a dead end death trap, where their eggs laid, or feeding caterpillars, or fragile chrysalids are tossed into the  trash or brush pile with clipped plant stems and seed heads  . . . and none of us want that!  A hands off approach leaves more time for study, learning, and joy.

The transition of “Cover” provided in this wildlife garden will be showcased, from brush piles in late fall through winter, to robust stands of perennials, trees, shrubs, and vines, including a number of native evergreens.  The film will showcase busy water features which draw wintering birds to heated bird baths, and migrants and nesting birds to a whole array of warm-season water features (from misters to fountains to bird baths).  The Sutton’s bird feeder array is showcased in conjunction with the fact that they’ve documented over 213 bird species in their yard in the past 40+ years.  Viewers will also see how Pat addressed “Privacy LOST” after a neighbor took down a hedgerow of invasives.

The 45-minute MONARCH EPISODE  came about because 2021 was a very good year for Monarchs in Pat Sutton’s native plant wildlife garden (and hopefully your garden too).  She had Monarchs in the garden daily from mid-June on. She found lots and lots of eggs and caterpillars from June through late fall.  She watched and filmed a Monarch caterpillar going into it’s chrysalis in the garden (a happenstance gift that she was at the right spot with her camera when that five-minute transformation occurred). She discovered five different chrysalids in her garden, and watched and filmed the adult Monarch emerging from two of them. So of course, the Monarch’s story had to be told so she could share this priceless footage.  This episode covers the many native Chocolate Cake nectar plants month-by-month that draw in and benefit Monarchs, in addition to the native Milkweeds they need for egg laying.  It showcases the many predators that target Monarchs (at all stages: egg, caterpillar, chrysalis, and adult) and other butterflies and moths.  And finally this episode conveys that each Monarch that survives to adulthood and begins its journey to their winter roost sites in the mountains of Mexico,  is not only a survivor, but a miracle!

Consider booking one or both of these episodes for your group!

Hopefully each episode will be as riveting to viewers as it was to Ben and me as we put it together. We had such fun with these episodes that many more episodes will follow focusing on different aspects of wildlife gardening!

Pat hopes these presentations will convert attendees to her wildlife-friendly garden methods as she showcases discoveries she made that would not have survived in more heavily tended, fussed-over gardens. 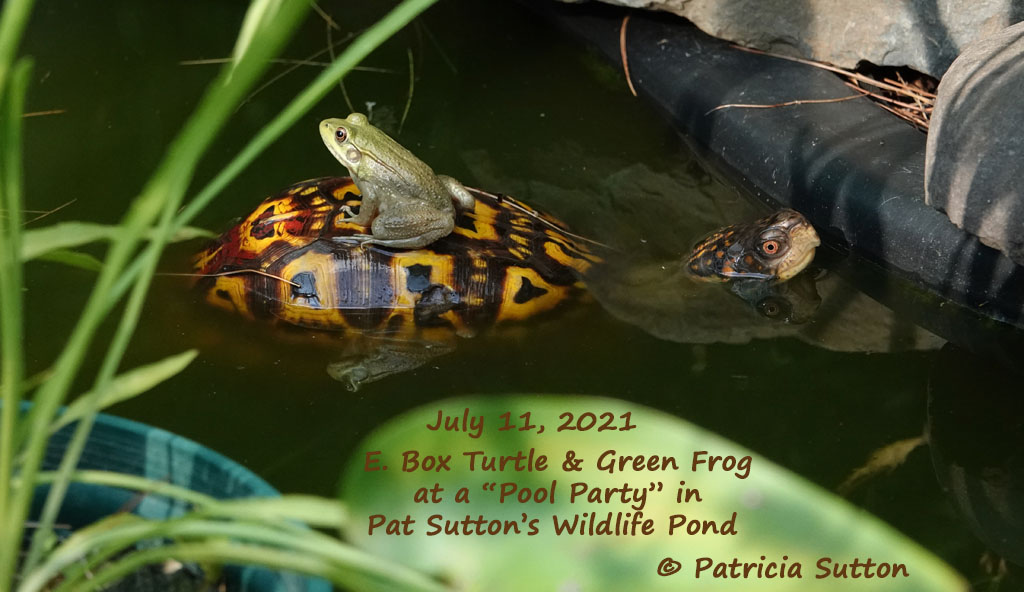 Through the early years of Covid, an unsettling and uncertain time, the Sutton’s wildlife garden soothed the soul, entertained, and educated. In this wildlife habitat so much happens right before your eyes, with layer upon layer of nature unfolding. Migrant and nesting birds find countless caterpillars and other juicy treats, as well as plentiful fruits and seed heads. Varied and beautiful pollinators benefit from native perennials, trees, shrubs, and vines that offer a cascade of blooms from early spring until blooming shuts down with late fall’s first frost. 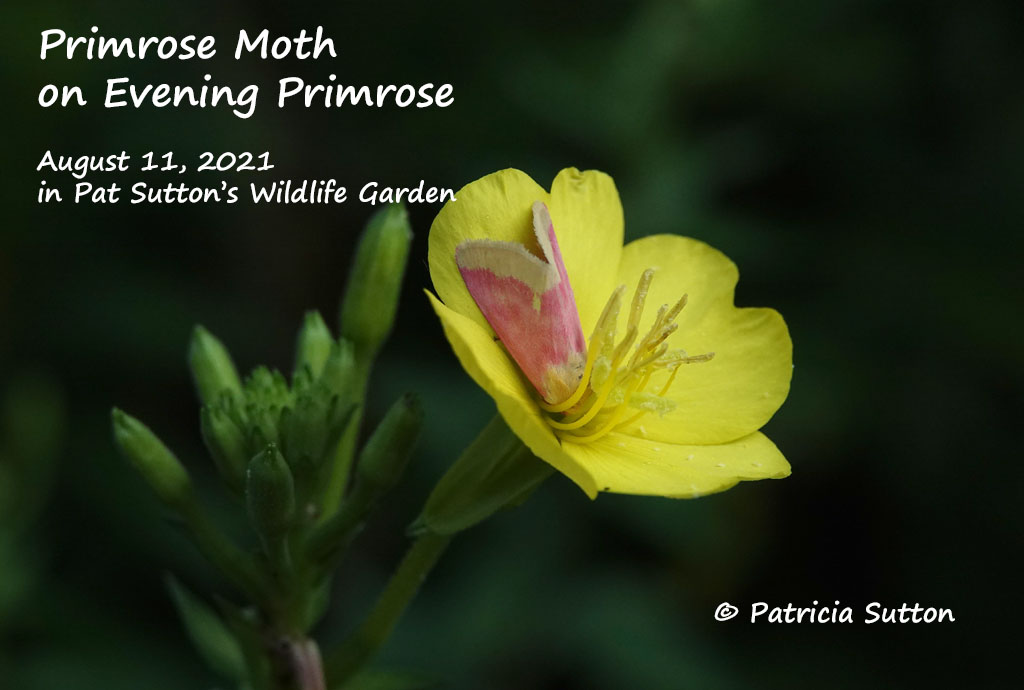 A din of calling Green Frogs on many summer nights led to their egg masses being discovered the next day. 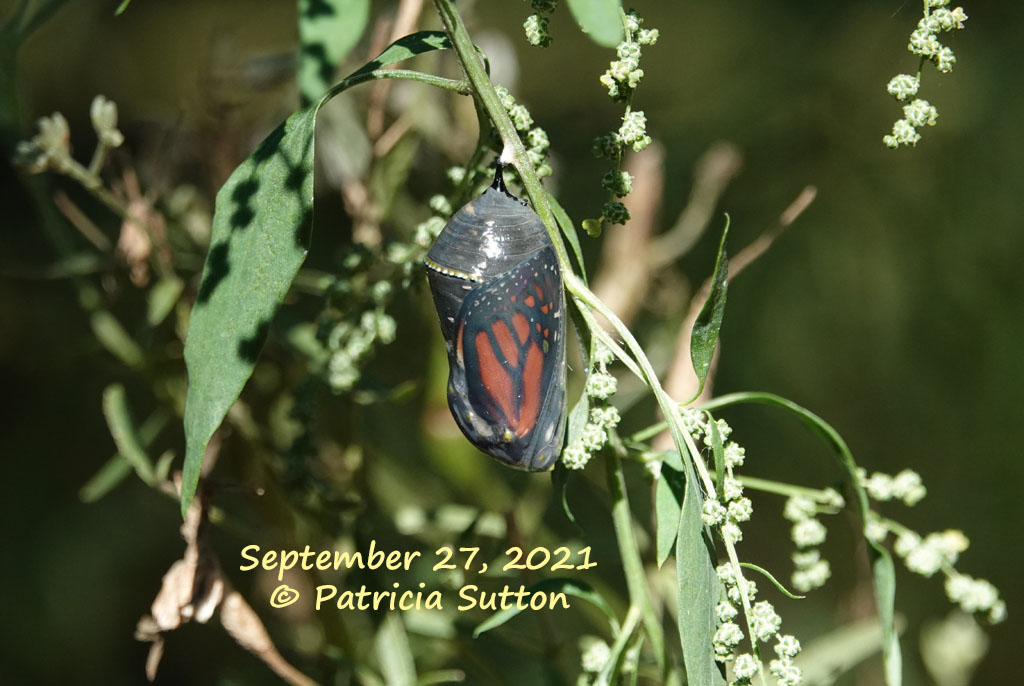 Life cycles occur on a daily basis. The Monarch’s life cycle is fairly easy to witness in a wildlife garden.  Because of the abundance of native plants in a true wildlife garden, many other life cycles are also occurring that are rarely discovered but just as fragile!

You may want to download and print the latest update of Pat’s “Gardening for Pollinators” Handout (CLICK HERE), which includes lots of sage advice, Chocolate Cake nectar plants month-by-month, and sources of helpful signage.  It will save you from making mistakes that all of us have made and help you create a healthy and safer wildlife garden.

Pat and Clay Sutton’s garden during the July Tour 2014

For twenty-three years (1991-2014), I led “Tours of Private Wildlife Gardens” in Cape May County.  I saw these tours as one of the best ways  to “grow” more wildlife gardeners.  You can see the excitement in the photo above as tour participants find, study, and share with each other butterflies, spiders, caterpillars, native bees, frogs, turtles, hummingbirds, and the beautiful nectar plants, host plants, wildlife ponds, water features, and habitats that have attracted them.

Many of the owners of these beautiful, private, wildlife gardens had taken workshops with me and / or attended these tours.

Many garden owners shared with me that a personal goal was to have their own garden included on these tours.  The number of wildlife gardens grew and grew.  Eventually there were so many educational gems to share that I broke Cape May County into three regions and led back-to-back tours, covering different parts of the county each day.  I led these tours in July, August, and September so attendees could see first hand the different “Chocolate Cakes” in bloom month-by-month and the variety of wildlife attracted.

On the final tour, garden-owner Gail Fisher presented me with my very own Chocolate Cake made by her Mom (it was delicious). 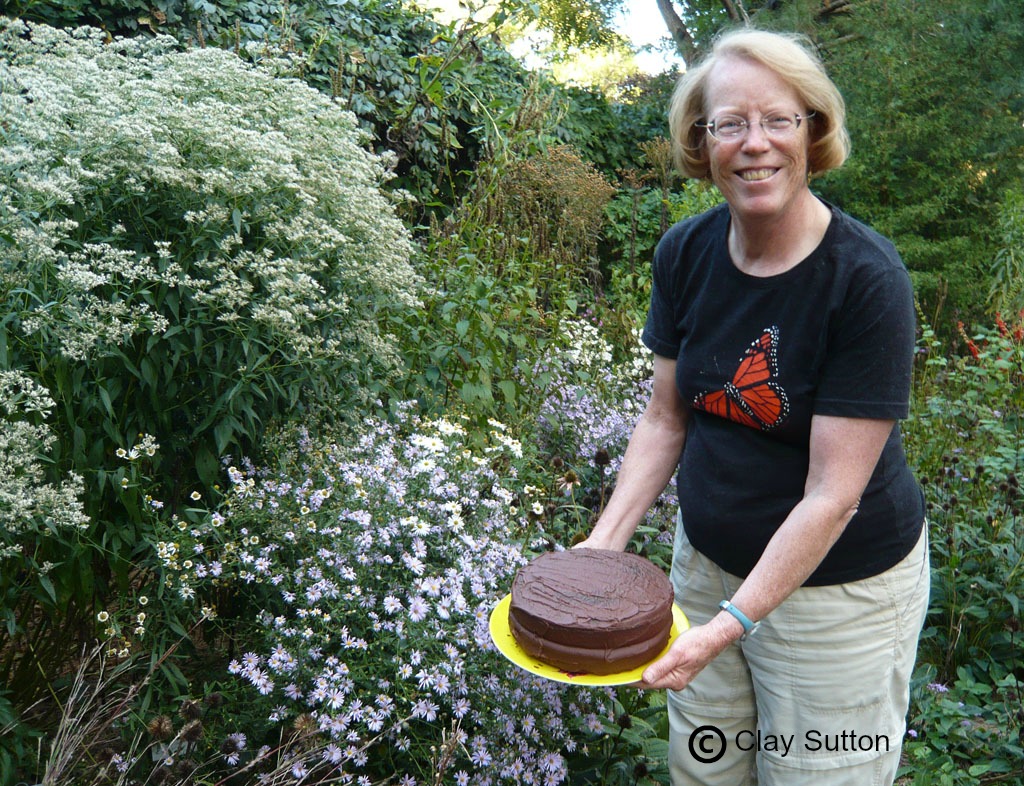 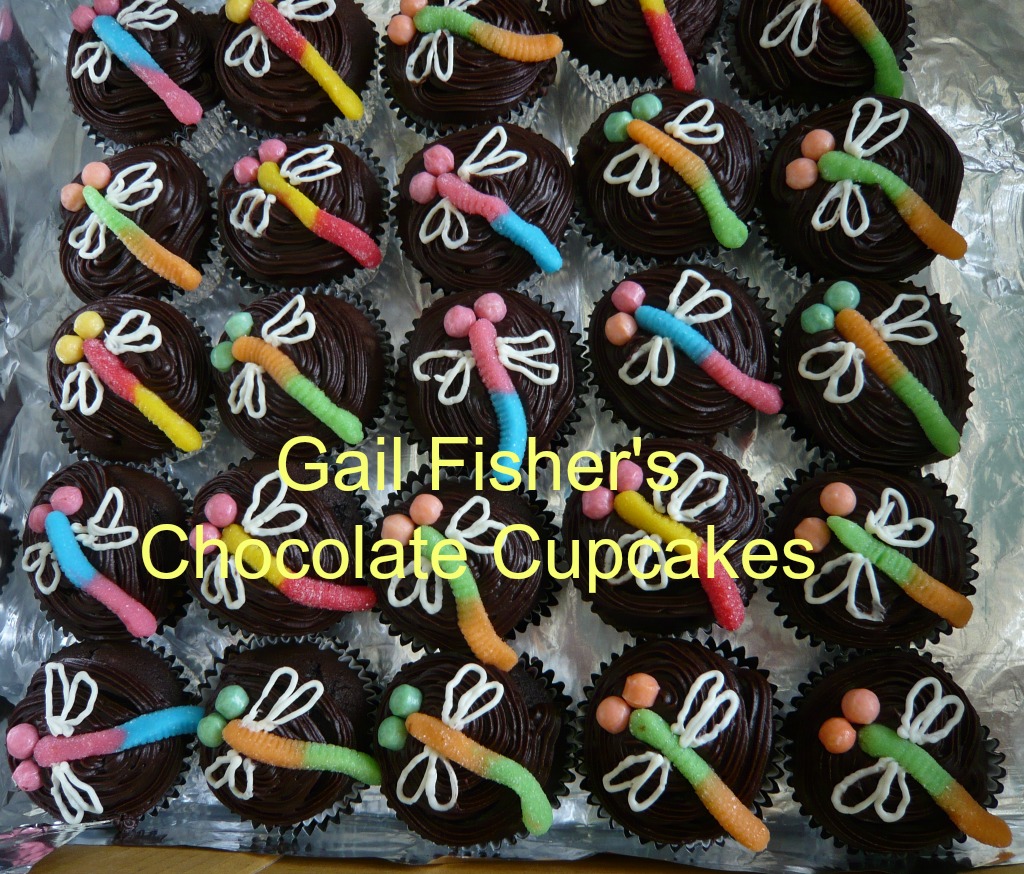 Many of the gardens that were included on the Cape May County tours can be seen in the photo galleries below.  These photos (taken over the years) truly record the evolution of these private wildlife gardens and may give you some great ideas for your own garden.